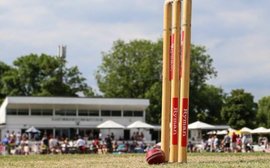 Around The Grounds - Week 12

Read here for a round up of the all the results and notable performances from Saturday 24th July.

Better late than never. After a busy cricket week, last Saturday seems like an age ago, but the 12th round of the Surrey Championship is undoubtedly worth reflecting upon.

In a top of the table clash the 1st Xl secured a losing draw against Wimbledon. Batting first Wimbledon scored 271 for 8, using all 66 of their available overs, with Johnny ‘Bean’ Fawcett taking 4fer. In response the Moles held out to secure a draw thanks to Drew Westphal’s 33* and Toby Porter’s gallant knock of 14 runs from 63 balls.

The 2nd Xl also secured the losing draw. Wimbledon scored 263 for 8 off their 55 overs, Frank Knight picked up 3fer. We made it 181 for 8 off our 45 overs. Dylan Marx was forced to reign in his usual Saffa rage and made a watchful 61.

The 3rd Xl romped to victory against Valley End. Batting first Valley End were bowled out for 175 before Ollie Jennings stroked 85*, allowing the Moles to cruise to a six wicket win with twenty overs to spare.

The 4th Xl were dominant, rampant if you will. Batting first we whacked 289 for six in our 45 overs with big chef Jez Downer scoring 78 and little chef Matt Moffat scoring 95. In response Whiteley Village 3s were bowled out for 44 with Keenan Carelse taking 4fer. Even by the 4s’ standards, this 245 run victory was particularly comprehensive.

A batting collapse condemned the 5s to a seven wicket loss. After losing our last seven wickets for just seven runs the 5s made 125 batting first, despite Kev Ingram’s 57. Valley End chased the total in 30 overs.

Ultimately, an OK week for the Molers, good luck to all who will be turning out for the maroon in the final third of the season.