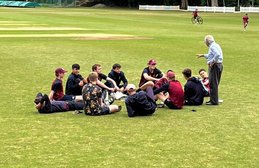 Around The Grounds - Week 7

Read here for a round up of all the results and notable performances from Saturday 18th June and Sunday 19th June.

Last weekend was another successful one for the Moles with four wins out of five on Saturday and a convincing Trust League victory on Sunday.

Starting with the Trust League our Under 21 Development side raced to a seven wicket victory against Esher. Bowling first the Moles were kind enough to win so quickly that the opposition were still able to order off the Miss Polly breakfast menu after the fixture. Harry Porter’s breathtaking 6fer helped dismiss Esher for just 82, a score which we chased in just 15.5 overs. Both teams fielded sides with a number of young 1st and 2nd team players, the growing strength of the junior section which Under 21s' manager Darius Burge helped to form will hopefully continue to manifest itself in more Trust League victories.

The 1st Xl won a thrilling victory away at Sutton. Bowling first we restricted Sutton to 207 all out off 64 overs. Jonny ‘Bean’ Fawcett took 9fer, an incredible number befitting the quality that he’s got under his belt. After Bean’s brilliant spell the chase was captivating. Mac Wright has made a seamless transition from white to red ball cricket and scored a superb 97, he was well supported by opening partner Jake Kings who made 53. 17 year old James Cake held his nerve to score 40*, needing seven off the last six balls Cake hit consecutive fours off the first two balls of the final over to secure victory for the Moles.

The 2nd Xl bowled first and dismissed Malden Wanderers for 125 thanks to a Mark Cattermull 4fer and three wickets for Henry Glynn. We chased the total with ease thanks to 38* from Toby Green and 35* from Dylan Marx, the 2s move up to second in the Premiership.

The 3rd Xl fell to defeat. Batting first the 3s were dismissed for 83, a strong bowling performance meant Dulwich chased the score with just three wickets remaining. Spinner Olly Mills opened the bowling and, despite going wicketless on the pitch, could easily have had 4fer. Skipper Elliot Hanson took 3fer and Keenan Carelse bowled superbly for his 2fer.

The 4th Xl defeated Hampton Hill 3rd Xl by nine runs. Batting first we posted 209 thanks to a 60 run partnership between Kev and James Ingram who scored 58 and 41 respectively. Skipper Jon Akhurst has unfortunately allowed his average to drop into double figures, the 58 he scored on Saturday keeps that average at a cruising altitude of 88. In response, Hampton Hill were nine wickets down and nine runs short at the end of their 45 overs.

The 5th Xl secured yet another victory, this time against a 3rd Xl. The 5s bowled out Stoke D’Abernon for 75 thanks to a superb spell from James Cole, who bowled six overs for just five runs with four wickets. The Moles chased the score with ease to complete yet another fifth team victory.

Another successful weekend for the Moles, well done to all involved.